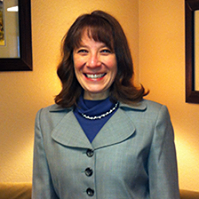 Angela M. Bradshaw Napper accepted a position at Walker & Walker Estate Attorneys in January of 2017.  A native Prescottonian, Angela has been admitted to the practice law in Arizona since 1995. Prior to entering private practice with her husband in 2011, she spent seven years working for the State Bar of Arizona in lawyer ethics and professional responsibility regulation. Angela spent the first seven years of her legal career in Flagstaff as a deputy public defender for Coconino County. After the birth of her first child, she worked briefly as a judge pro tem in the Flagstaff Municipal Court.

Angela is a graduate of Prescott High School and earned her bachelors degree from Northern Arizona University.  She holds a juris doctorate from the University of Arizona.  Angela recently served on the board of the Prescott Unified School District Education Foundation.  She served a four-year term on the Yavapai Regional Partnership Council for First Things First, and a three-year term on the board of the Prescott Farmers Market. She is a member of Arizona’s Finest Lawyers, the Yavapai County Bar Association, and the Northern Arizona Women Lawyers Association.  She is an active volunteer in her sons’ scouting, sports, and school activities.